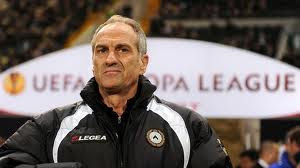 Francesco Guidolin, you are one of the most famous Italian managers, but you are not so known abroad, despite of your recent experiences in Champions League and Europa League with Udinese. How would you present yourself to the English fans?
“I'm near to the 500th cap, 470 in the Serie A and 30 in Ligue 1 with Monaco, and I have the English football in my heart. My contract with Udinese will close in 2015, after that I dream to train an English club”.

Another candidate for the Ferguson's reign?
“Absolutely not. I love to start from the bottom, to help teams in difficulty. When I was young I used to follow Nottigham Forrest, Southampton, Leeds. Instead of Man Utd, Chelsea or Arsenal, I would prefer those kind of teams. The old faded nobles searching for a new life”.

Why did you have to wait your 56 to get a top trainer?
“I like to work hard, but I am not a image-maker. I prefer to go on the pitch than in Tv. Often the whole destiny is decided by single situations and I was very near to Juventus, Inter and Lazio in the past. Anyway, I used to think that a great trainer has not to be judged just by the roll of honor. Stanley Kubrick didn't win the Academy Award, but you can't say that he wasn't one of the greatest directors ever”.

Why Premier League is more appealing than Serie A? We used to be “The best tournaiment in the world”.
“I am a big fan of cyclism and it happened the same as between the France Tour and the Giro. In one word: planning. Now Tour is the most famous race in the world as the Premier League is the most appealing championship for the rest of the world.  In the late Nineties, Calcio was the best tournaiments but its rulers didn't understand that we needed new stadiums. It's partly a sport question than a more general way to think. Anyway, on the pitch I don't think that Premier is really better than Italian football”.

If you would be English, what would your team?
“I like Manchester United”.

But you have just said that you are not a ManU's bench candidate!
“Correct. I am just a fan. When I was child, there were not football on Tv, we read about the foreigner teams on the paper. Just few lines, but enough to fall in love with George Best. I like also Liverpool and I think that Arsenal is philosophically very close to my Udinese”.

ManU, Liverpool, Arsenal... Too much, mister Guidolin!
“Oh, don't misread me! As a professional trainer I dream a little, romantic team. Preferably in London. My son is studying there, so I have already the flat!”.
Pubblicato da Unknown alle 15:30

A day in Amman